The Fair Hydro Act, 2017 came into effect on June 1, 2017. The Act puts in place the framework for giving effect to the Fair Hydro Plan initiatives...

The Fair Hydro Act, 2017 came into effect on June 1, 2017. The Act puts in place the framework for giving effect to the Fair Hydro Plan initiatives that the government has stated will:

This page explains how the Fair Hydro Act, 2017 will affect different parts of electricity bills, starting July 1, 2017. It also explains that the Fair Hydro Act, 2017 is not a distribution or transmission rate freeze. Utilities may still apply to the Ontario Energy Board (OEB) for approval to change their distribution or transmission rates.  The OEB will continue to review and test any proposed rate changes through the same open, robust and inclusive process that we use today, and to make decisions that serve the public interest.

The “Electricity” line of your bill covers the cost of the electricity you use in your home or small business. If you buy your electricity from your utility, the electricity prices on this line of the bill are set by the OEB and are referred to as the Regulated Price Plan or RPP. For most customers, these are time-of-use prices.

A couple of things to keep in mind about the 25% fair adjustment:

To protect consumers, the OEB took into account part of the reductions that had been announced as part of the Fair Hydro Plan when it set RPP electricity prices on May 1, 2017. So if you are buying your electricity from your utility, you already started seeing a bill reduction for electricity that you used since the beginning of May.

How the 25% fair adjustment works:

If you buy your electricity from your utility, you will see this fair adjustment in the form of lower electricity prices. On June 22, 2017, the OEB announced new lower RPP electricity prices.  The table below shows what the time-of-use (TOU) RPP prices would otherwise have been for RPP customers in the 2017 summer period (May 1 to October 31) and the new lower TOU prices set by the OEB to start on July 1, 2017:

You will pay these lower electricity prices for electricity that you use starting on July 1, 2017 and ending on April 30, 2018. At that time, the OEB will reset RPP prices in a way that holds increases to the rate of inflation in accordance with the Fair Hydro Act, 2017.

When the OEB set the new RPP electricity prices, it followed the rules in the Fair Hydro Act, 2017 and in a new regulation.

The GA modifier will be in effect from July 1, 2017 to April 30, 2018. Utilities will apply the credit to your consumption in a billing period to reduce the GA charges that you would otherwise have paid during that period.

If you live in a condo or apartment that has its own individual meter and your bill comes from a company other than your utility, you are a customer of a unit sub-meter provider. You are still eligible for a fair adjustment. In this case, your electricity charges will be reduced by your proportionate share of the fair adjustment that was applied to the electricity bill for the building as a whole.

How the rate of inflation fair adjustment works:

For May 1, 2018 to April 30, 2019, the OEB will set new RPP electricity prices and a new GA modifier in accordance with rules set out in a new regulation.

The “Delivery” line of your bill covers the cost of delivering electricity from generating stations across the province to your home or business through high voltage (transmission) and low voltage (distribution) lines.

For most consumers, the bulk of the impact of the Fair Hydro Act, 2017 will be on the Electricity line of their bills. As mentioned earlier, that is because the Fair Hydro Act, 2017 is mainly about spreading the cost of investments in Ontario’s electricity supply over a longer period of time. It is not about freezing distribution or transmission rates. Your utility needs to continue to maintain its existing wires, equipment and buildings and invest in new ones when needed so that it can keep providing you with the reliable supply of electricity and quality of service that you need for your home or business. Sometimes, that means that the distribution or transmission rates for your utility may need to go up to cover the cost of providing that service. So, some consumers in the province will see their delivery rates fluctuate from time to time over the coming years. But they will also see the fair adjustments that will take place through their electricity prices.

This means that the OEB’s work in reviewing rate applications is just as important under the Fair Hydro Act, 2017 as it has always been.

The proposed [Fair Hydro] Plan is not intended to limit the OEB’s mandate to set just and reasonable rates or payment amounts.  The government fully expects that the OEB will continue exercising its mandate in the public interest as it does today.
- Letter from the Honourable Glenn Thibeault, Minister of Energy, to Rosemarie Leclair, Chair & CEO of the OEB, April 10, 2017

Utilities must still apply to the OEB if they want to change their rates. And it is up to the utility to prove to the OEB that any increases in their costs are justified and why. Before being allowed to raise rates, utilities must show that they are doing everything possible to be more efficient and keep improving. The OEB will continue to help control costs through its open, robust and inclusive process for reviewing and testing proposed distribution rate increases. And we have a very strong track record of doing just that:

Under the Fair Hydro Act, 2017, two new programs will provide additional electricity bill relief for certain electricity customers in the province. Unlike the fair adjustments described above, no intended end date has been announced for these new programs. These two new programs are being funded through taxes.

The OEB will continue to set distribution rates for the rate-regulated utilities mentioned above that are covered by these two programs, using the same rigorous process that it uses today. Like all utilities in the province, these utilities need to continue to maintain existing assets and invest in new ones when needed so that they can keep providing the reliable electricity supply and quality of service that their customers need. To the extent that these two programs mean that the cost of providing that service is not recovered from their customers, the difference is intended to be funded through taxes. So, the OEB still has an important role in ensuring that these utilities provide an appropriate level of service quality to their customers at a reasonable cost, and that they are doing everything possible to be more efficient and keep improving.

The “Regulatory Charges” line of your bill covers the cost of operating the wholesale electricity market and maintaining the reliability of the province’s high voltage power grid.  It also includes the cost of funding the Rural or Remote Electricity Rate Protection (RRRP) program, which helps to offset the higher cost of providing electricity service to customers in rural or remote areas of the province. Until recently, the Regulatory Charges line also included the cost of the Ontario Electricity Support Program (OESP), which provides eligible low-income customers with monthly on-bill credits to reduce their electricity bills. 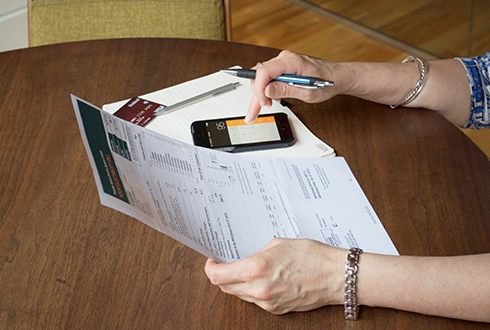 Do you want to receive updates from the OEB?