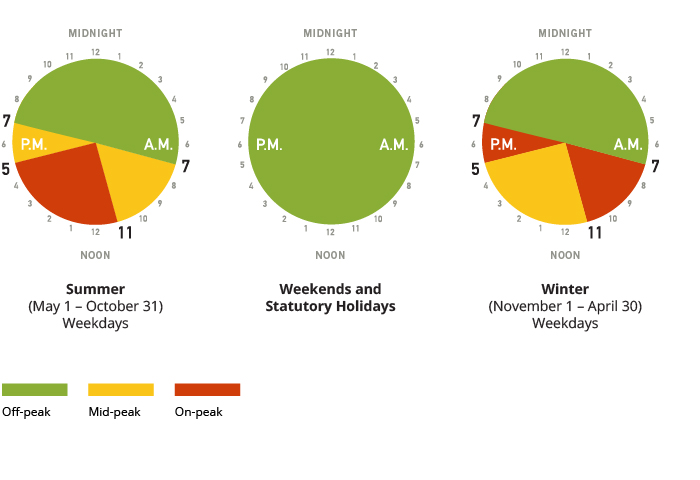 Time-of-use rates are different depending on when you use electricity. There are three periods:

Time-of-use rates vary according to demand. They are cheapest when demand is lowest: during the evenings, on weekends and on holidays.

In Ontario, when demand is lower, most of the power we use comes from sources like nuclear generators and large hydroelectric stations, which are designed to run all the time. This is called baseload power.

As daytime begins, more people turn on their lights and appliances, and businesses ramp up their operations for the workday. These are high demand times for electricity. If all of the baseload power is used, the province turns to other sources like natural gas-fired generation, which typically costs more than baseload.

Time-of-use rates follow a similar pattern: as the demand for electricity rises, the price increases, and as it decreases, so does the price.

People use electricity differently depending on the season, so we established two sets of time-of-use rate periods: summer and winter. No matter which season, on weekends and holidays the cheapest rates are in effect all day. The charts below show when time-of-use rates apply in summer (May 1-October 31) and in winter (November 1-April 30).

In summer, electricity use peaks during the hottest part of the afternoon, when air conditioners are running on high. On-peak hours are mid-day. 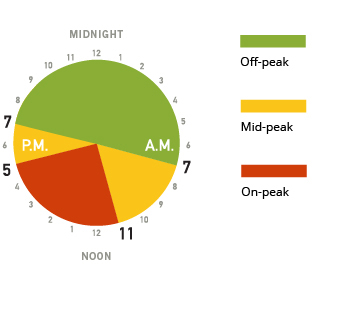 In winter, less daylight means electricity use peaks twice: once in the morning when people wake up and turn on their lights and appliances, then again when people get home from work. There are two sets of on-peak hours to reflect this. 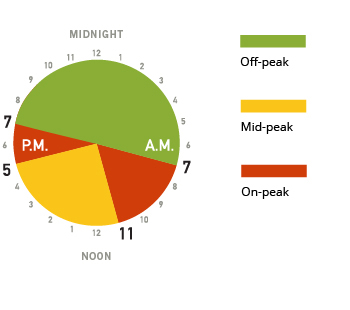 Your bill shows how much electricity you use

One kilowatt-hour is the same as using 1,000 watts of electricity for one hour. For example: